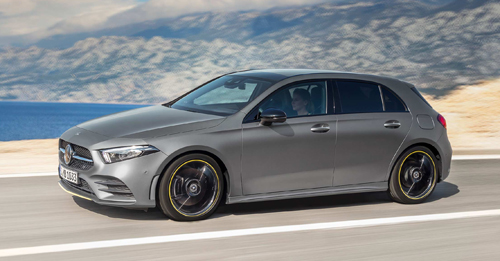 In early 2018, Mercedes-Benz released the official images of the 2018 A-Class. The car was later unveiled at the Geneva Motor show in March. The launch of the A-Class is part of Mercedes-Benz’s plan to launch 8 compact models in India by 2020. The 2018 A-Class is based on an updated version of the old MFA platform. This update has essentially allowed Mercedes-Benz to sport a longer wheelbase and subsequently more interior space. Speaking of which, the dashboard and the interior design has been updated in this new-generation model. In place of dials for instrumentation and floating screen, the A-Class now gets one high-resolution screen for each function – you can also choose between two 7-inch displays and two 10.25-inch display screens or you can even mix and match.

At the heart, the new-gen A-Class will come fitted with a 1.4-litre or a 2.0-litre petrol motor. There will also be an option of a 1.5-litre diesel motor. The base A200 petrol with the 1.4-litre motor churns out 160bhp and 250Nm, while the larger A250 engine is rated at 221bhp and 350Nm. The diesel, on the other hand, makes peak power of 114bhp and max torque of 260Nm. All engines come paired with a 7-speed automatic transmission.

While there is no official announcement as yet, Mercedes-Benz is likely to bring in the new A-Class towards the end of the year. Expect it to be priced marginally higher than the older model.